If you told developers back in 2005 that they could make money off of an API, they'd laugh at you. The notion that you can build just a layer of software— just one functionality— and sell it as a product seemed insane.

The obvious problem with “selling” an API as a product is marketing. There's no sleek interface to promote and no demo that can show off the bells and whistles. It's essentially an invisible product, whose value is only evident once it's integrated into a platform— something that takes hours, days, or weeks to become familiar with.

The second issue is wide adoption. The platforms that could benefit the most from an API integration aren't usually run by developers. Founders, CEOs, and product managers don't always have the technical chops to see the value in outsourcing dev work, rather than getting their teams to build it from scratch. After all, that's what they pay them for, isn't it?

But despite these barriers to productization of APIs, API-first companies did emerge, and they've shaped what's become known as the API economy. API-first companies are now not only ubiquitous—they've also redefined expectations for all API design and documentation for developers. Today, the 15,000+ publicly-available APIs are held to an entirely new standard.

Here are the major players who we all have to thank (or curse).

We think of APIs as building blocks that are the raw ingredients of innovation because they allow developers and organizations of any size to rapidly build new ideas. — Jeff Lawson, Twilio Co-founder & CEO

When Uber first launched, they had built basic text messaging communication — but it sucked. Text messages weren't going through immediately, leaving many unhappy customers either waiting in the rain for a car that was canceled or waiting indoors for a car that had arrived several minutes ago. There was too much friction for the high-end experience that Uber was promising its users.

Many companies, just like Uber, were spending hundreds of thousands of dollars and dev resources building phone capabilities into their apps. But unless these companies were able to hire separate Telecom engineers, the phone capabilities often turned out sub-par. In an increasingly mobile-first environment, the need for instant communication was pressing—but most tech companies lacked the resources to make it happen.

That's why when Twilio CEO Jeff Lawson pitched his API to his seed investors its value as a product became immediately obvious. He pitched, “We have taken the entire messy and complex world of telephony and reduced it to five API calls.” When he live-coded and got the investors' phones to ring in a matter of seconds, they closed the deal.

The utility of Twilio was obvious to developers and non-technical founders alike. Even though they were selling an invisible product, the need for such a solution was so great that businesses were willing to buy in from day one.

Twilio didn't just help its customers succeed. They paved the way for an entirely new industry of API-first companies. Over the next few years, companies started following suit, offering simple—but otherwise pricey—integrations, including Stripe in 2011, which offers payment services, and Algolia in 2012, which offers web search functionality.

The ability to outsource a small functionality was a game-changer for tech startups that wouldn't have been able to build out the software on their own. Companies like GroupMe, Lyft, and Shopify were only able to take off because they no longer had this huge technical barrier keeping them from building the product they dreamed of.

Much like in the physical world when a 12 year old wants a light-saber, cuts the handle off an old broom and shoves a bike grip on the other end, you can take two things in the digital world and combine them in ways the original creators never imagined. — Linden Tibbets, IFTTT Co-founder

In the following years, some lone developers and tech-savvy product teams started buying into API solutions, but they weren't really popular yet. Non-technical founders and product managers weren't quite willing to invest in an integration that they could just ask their internal dev teams to build from scratch. It wasn't until IFTTT and Zapier that non-developers learned the value of an API.

IFTTT, launched in December of 2010, let consumers make if-then formulas and “put the internet to work for them.” Their first website was essential API documentation— but for consumers: 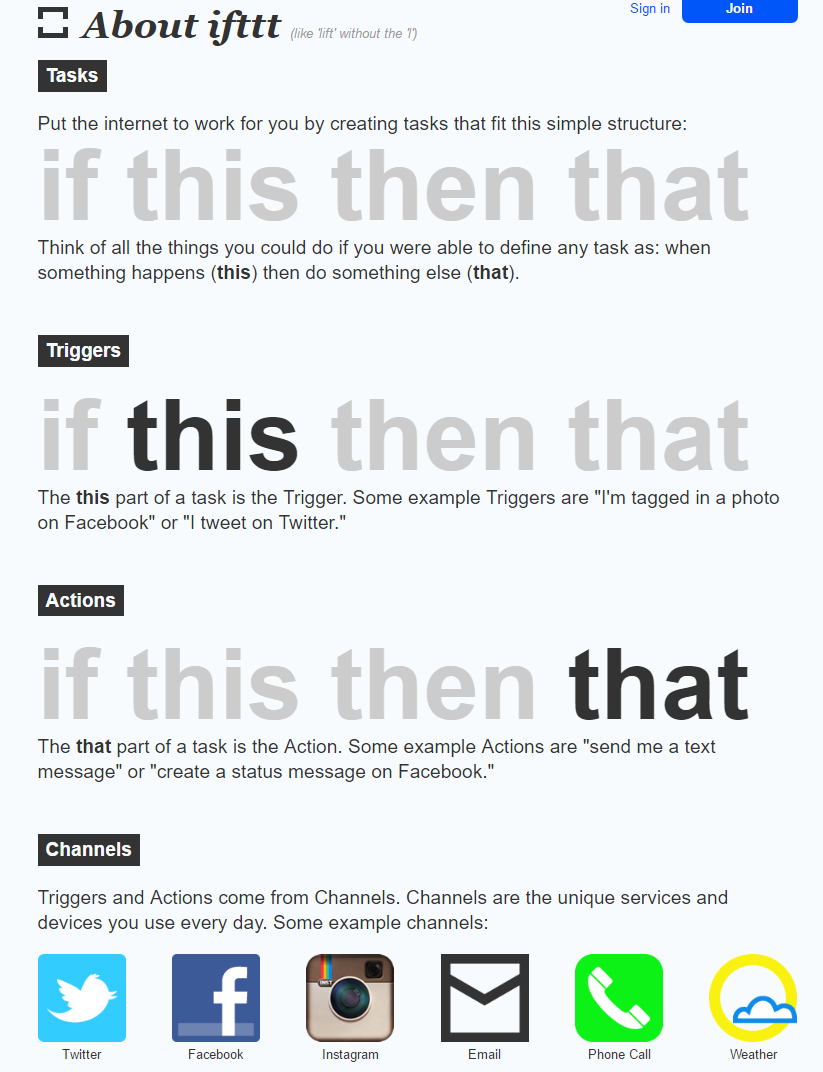 IFTTT opened up API functionality to consumers. A blogger could post on Twitter, Facebook, and Instagram at the same time. A fresh college grad could set up a thank-you email to automatically be sent after their job interview. Anyone could “program” without being a developer. 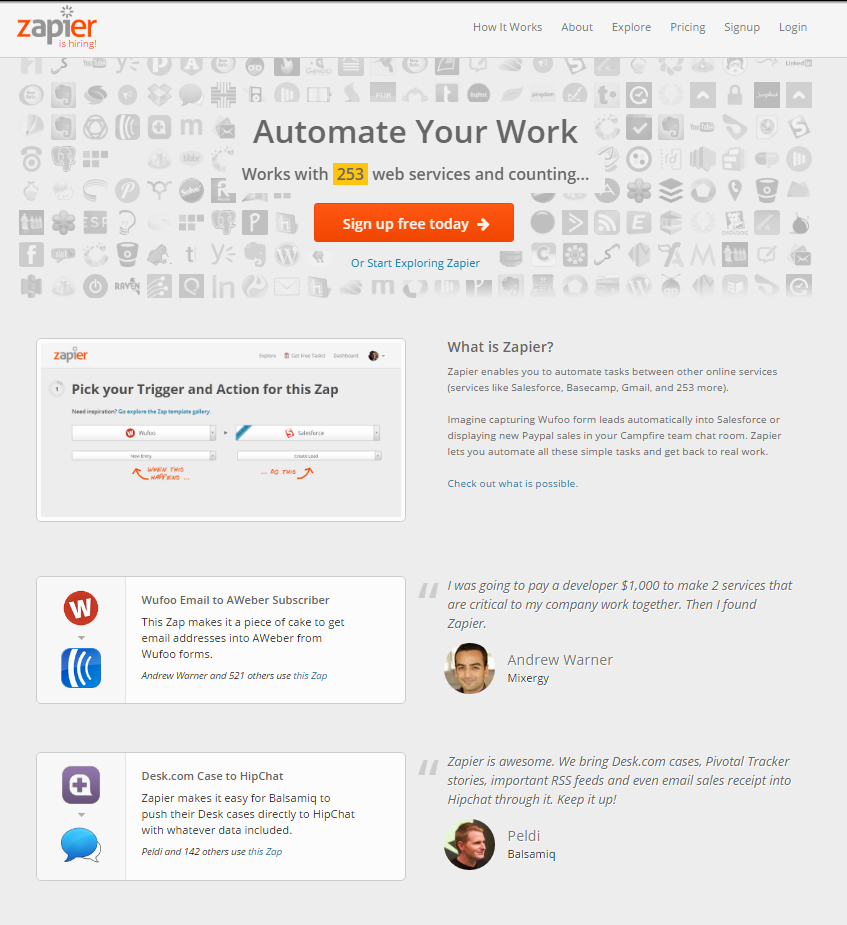 [Zapier marketed their product as more of a B2B tool, differentiating themselves from IFTTT]

IFTTT and Zapier made API consumers out of virtually everyone. They even let consumers integrate several APIs at once, essentially enabling them to design their own software.

These two companies helped make the concept of integration much more digestible. API was no longer a stuffy developer term, it was an industry-wide term. And companies of all sizes started to slowly buy into this idea of paying for just a single functionality while their dev teams focused on the core product.

With all the right pieces in place, the API economy was ready to take form.

As the notion of APIs started catching on, sophisticated tools for more niche target audiences emerged. You had companies like Tradier, which let partners pull real-time stock data. Or Clearbit, which offered enriched data on potential customers for growth teams in B2B companies. Or Contentful, which is a CMS that lets you make your content available anywhere—not just your browser window.

The API explosion changed the nature of software development. Tech startups could concentrate all their dev resources on doing one thing really well, and integrate APIs that could do the rest.

This is even better news for API-first companies. All they have to do is create a well-designed, easy-to-implement API, and have other developers do the heavy lifting for them. And because dozens of companies become co-dependent on the API's success, an API is stickier than any traditional software product.

As a result a small ecosystem forms around each API.

And this contributes to a larger API co-dependent ecosystem that's become known as the API economy. The API economy means that each part of the software stack is optimized for speed, performance, and usability, supercharging what software is capable of.

We can't wait to see what's next.