For a long time, ReadMe was in a love-hate relationship with our lowest tier plan. We think that beautiful docs should be available to everyone, but as a small team, this tier that required a lot of time and frankly, just didn’t monetarily make sense. If you’ve joined us since then, the plan involved some of our basic features (that being mainly, docs). Because many of these customers just wanted docs for a side project, this created two issues:

After thinking about it for months, it was clear it just wasn’t meant to be. Now that we’ve had some time to reflect and watch the numbers, here’s why we think this was the right decision.

*Fun/weird note: When we launched, we offered this plan completely free. This resulted in even MORE support, and strangely a lot of people saying “why don’t you have a free plan?”. The $59 plan seemed too expensive by comparison, and everyone assumed the free version was useless. To end the madness we bumped that plan up to $14/month. Clearly it was only a temporary reprieve!

After crunching the numbers, it turned out that the amount of money we’d lose from halting sign-ups on our $14 Documentation plan* was only a small part of our profit and users, but amounted to a huge part of our support. Here’s how our plans originally were broken up: 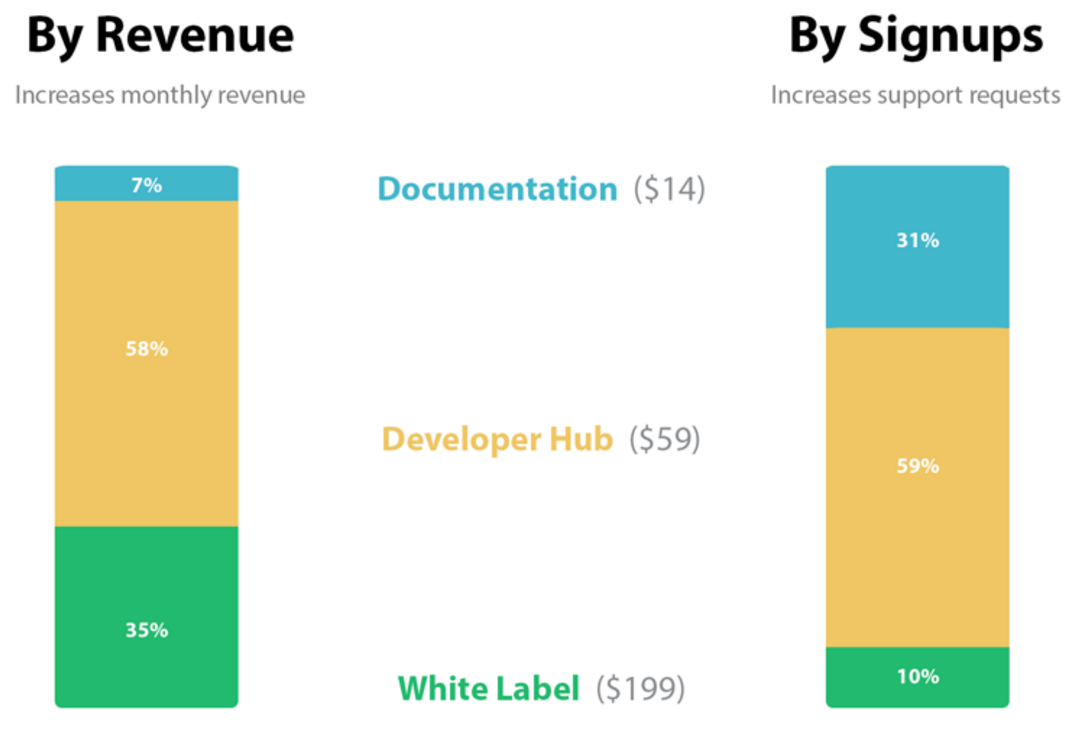 While we loved providing a more affordable plan, it was hurting our ability to build new features that helped accomplish our larger mission. On December 16th we said our final goodbyes to the $14 Documentation plan.

So far we’ve been extremely happy with the results of this decision. Here’s the metrics from December 16 through February to show you why:

As new users gravitated towards our more in-depth plans, they got happier! Fewer users churned (stopped using our service), while at the same time we spent less time per user educating them on our product. It’s important that we keep the amount of churn significantly below the amount that we’re growing, and we’re able to see this in our MRR.

Since customers began signing up for a more expensive monthly plan, we saw a huge increase in the lifetime value of each customer.

Support was an important part of this decision. The fact that it decreased significantly is really important to us. It means that we can respond quicker to paying customers… and as a bonus, less time answering emails means more time working on new features! We’ve found support response times for us directly correlate to conversions (and happiness!).

What’s the connection between cheaper projects and support/churn?

The reason we considered getting rid of the cheaper plan first came down to two things, the large amount of support and the churn that we were experiencing. While a lot of these customers enjoyed ReadMe, it was used mostly for side projects and a lot of these eventually fell by the wayside. ReadMe’s mission is to build out interactive developer hubs, and we believe that there are other good options for less complex docs.

Why get rid of a plan?

A lot of factors came together in our decision to get rid of our lowest plan. From freeing up our time, to decreasing churn, to actually making our customers happy, all of the factors seemed to point in the same direction. In the long term, cutting down on our support means we spend less of our time to acquire each user, and when they do convert they are not only at a higher price point, but also happier. We can work more closely with customers and still have time to build out the features that will make our product better. As we move forward this will let us scale ReadMe and help even more people meet their documentation needs.

Thanks to Baremetrics for all of these snazzy graphs!

Precision With Every Pixel